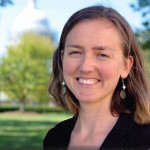 Kate Gould is the Senior Policy Advisor for Rep. Ro Khanna, and has helped advance the Congressman’s initiatives to free political prisoners in Egypt and end U.S. military support for the Saudi-led war in Yemen.

Gould previously served as the Legislative Director for Middle East Policy at the Friends Committee on National Legislation (Quakers). She was profiled by Congressional Quarterly as the “Quaker Behind the Iran Deal Fight,” and has been recommended by a coalition of progressive organizations for a position in the Biden Administration. Her analysis has been published in the New York Times, The Washington Post, USA Today, TIME, CNN, Reuters, The Guardian, and has appeared as an on-air analyst for PRI, Fox News, and other TV and radio programs. Gould is a Political Partner at the Truman National Security Project.